All Collections
Reports
Other
Understanding Campaign Rates in the Reports

Understanding Campaign Rates in the Reports

Learn about open, click and sales rates in campaigns and how they are tracked in Omnisend

Written by Paulius
Updated over a week ago

Campaign reports are your primary source of information regarding monitoring how well your campaigns are doing. You will find the detailed reports of every campaign you run with Omnisend in our Reports section. Select the campaign you want to check, and you will see all the details related to that particular campaign.

Campaign performance, Sales, Email Client, and Device reports
Tracking opens for each of the messages
Other metrics

Based on your subscribers' reaction to the campaign, we calculate the following rates: opens, clicks, sales, unsubscribes, hard bounces, and marked as spam emails. We also monitor the devices your subscribers use and the 24-hour performance of your campaign after it is sent out. 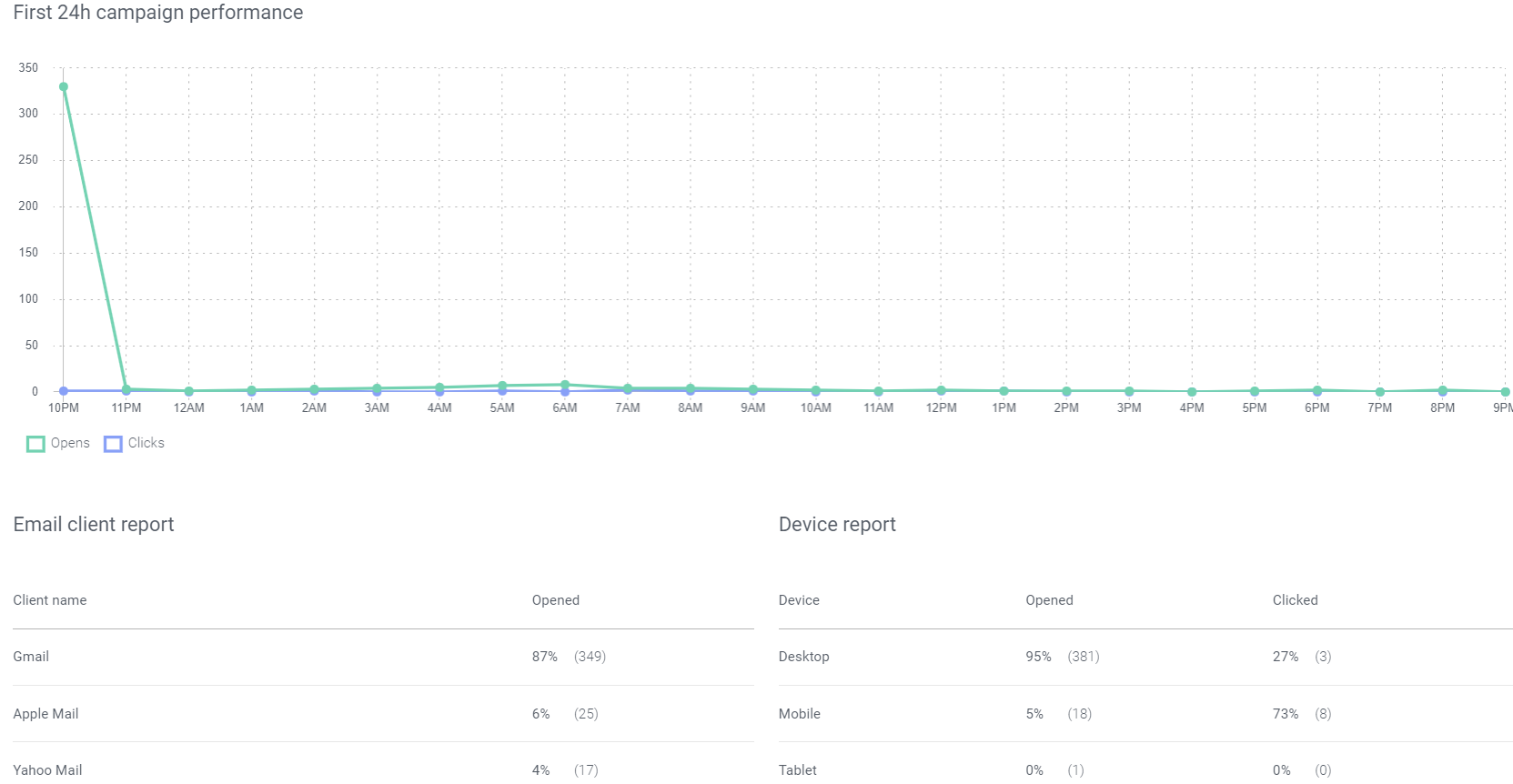 What's important to note here is that the Open rate for the SMS Campaigns is not tracked. The critical metric for the performance estimation for the SMS channel is the click rate. So make sure you include a clickable link in your SMS campaign to see how much action that campaign initiated. Adding a link will let you know the click rates and measure client engagement via the SMS channel.

Another important aspect is that adding an opt-out instruction to the SMS message is mandatory for the promotional Campaigns sent to US customers and optional for the rest of the world. Therefore, the Unsubscribe rate for the SMS Campaign includes additional metrics telling one how many unsubscribed contacts had that option available. If all your messages were sent to US customers, 100% of them would have this option. For more information, check this article.

Here, you can also see the general information about the newsletter, including your campaign name, sender's name and sending date.

Your campaign ID can be found at the bottom of the report.

Tracking opens for each of the messages

We place the tracking pixel in the email to track whether an email has been opened. Since the subscriber opens the email, the pixel loads and gives us a signal of "opens". This way of tracking "opens" can happen if the subscriber hasn't turned off the option of loading images; however, if they have turned on the option not to show the images and received only plain text emails, the HTML version with the tracking pixel loads immediately after they click on the link in the email.

Open rates depend on various reasons, such as campaign subject lines and context, sending to the targeted audience, or choosing the right time. Learn how to improve your open rates with better subject lines and send a successful email campaign that your subscribers will open!

This campaign metric indicates the proportion of subscribers who have clicked on any of the links in your email. Moreover, we add the UTM parameter to every single link so you can see the traffic from your email campaign in the Google Analytics account.

All the clicks can be seen in the click map in your campaign report. It counts the unique (unique clicks on the different links) and total clicks (all the clicks, including multiple ones).

Also, you can check each link performance in the 'Link activity' section:

This graph indicates the number of sales generated by a campaign and the number of orders placed. In e-commerce, sales are the primary indicator of the success of email marketing campaigns. Omnisend tracks sales from all channels (emails, SMS, push notifications) and shows it next to other metrics of that particular campaign or automation so you can get a full view of the results.

Note! If the order gets 'cancelled', 'voided' or 'refunded' status, it's deducted from the Revenue generated by this campaign. Orders with all the other statuses (including 'partially refunded', 'partially paid' and 'pending') are added to the revenue with full order value.

It refers to emails sent back for permanent reasons, marked as spam or unsubscribed emails.

It shows a number of those recipients who decided to opt-out of your emails. The lower this rate is, the better. The average unsubscribe rate for e-commerce is 0.2%, but your account won't be suspended for an unsubscribe rate lower than 2%. A high unsubscribe rate may bring even more damage to SMS messages. Therefore, always keep an eye on this metric, try adjusting the content of the message, offer more incentives, and try bringing more value to your customers.

This metric means that some of your subscribers have complained and treated your email as spam. The average rate of such reports in e-commerce is 0.01%. A spam rate greater than 0.1% of all recipients can result in the account being marked as spamming and locked or terminated.

Please note! Contacts that report your emails as spam are automatically unsubscribed (except Gmail, because Gmail doesn't provide this data).

In this report, only hard bounced emails are included. If the emails to the same subscriber are soft bounced 4 times, our system counts it as a hard bounce and does not send any emails to this address anymore. The average bounce rate for e-commerce is 0.3%. A bounce rate greater than 4% indicates a stale subscriber list and can damage your sender's reputation with no possibility of regaining it.

In this report, only hard bounced phone numbers are included. If the SMS to the same subscriber are soft bounced 4 times, our system counts it as a hard bounce and unsubscribes such contact. It takes 4 SMS campaigns/automated SMS for contact to get soft-bounced. So, if contact gets one of the soft bounces for the first time, it won't be unsubscribed right away, but only if you send another 3 SMS from campaign/automation, and it'll get soft-bounced 3 times more.

If a contact gets unsubscribed due to hard or 4 soft bounces, we'll add the unsubscribe reason to its contact profile that is equal to the name of the hard/soft bounce. You can check the example below: 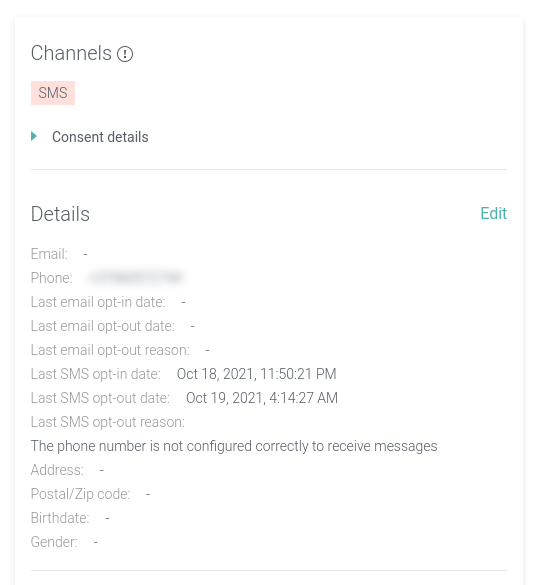 Note! This feature was released on October 20th, 2021. If your SMS messages had soft/hard bounces before this update, we have unsubscribed such contacts and added the tag 'unsubscribed_by_bounce_retrospectively'. So, it'll be easier for you to identify those.

There is also a device report. It shows on which devices recipients opened and clicked your newsletter: mobile, tablet, or desktop computer.

Monitor your reports and keep on improving! Also, the next feature will definitely help you with this.

With the release of iOS 15, we've added another important metric to our Email Campaign reports. You can check which Email Clients have been used by your contacts you open your emails. It'll help you to understand how massive the impact is on your open rates, as all the emails delivered to the email addresses connected to the Apple Mail App are opened automatically. Read more about this here. 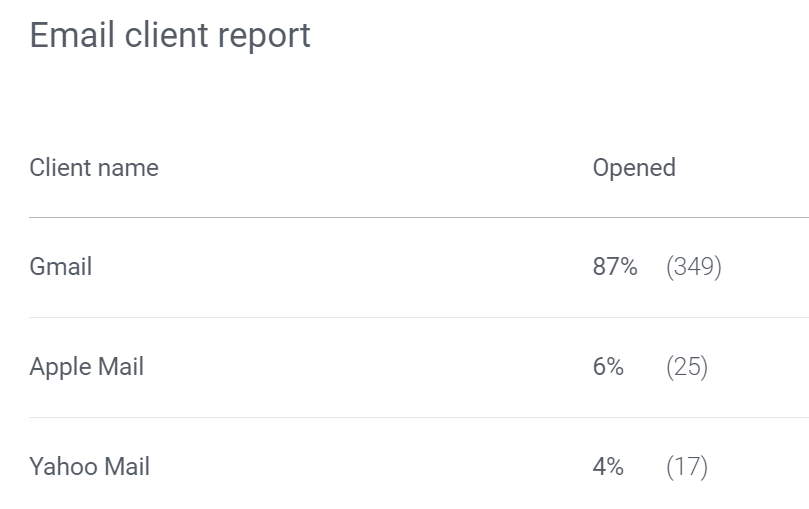 Note! The 'unknown' client name refers to the email clients that Omnisend couldn't identify. As we cover all of the most popular email clients used by customers worldwide, most cases, 'unknown' represents the number of fake opens that came with iOS 15.

Have any additional questions? Feel free to contact us at [email protected].